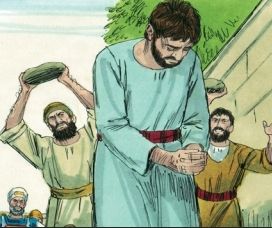 Paul founded the church at Corinth. But later on, when he was coming back through that area, we see that the Corinthians had a very distinct concept of their relationship with Paul, and that they were limiting who would speak in their church, and even the Apostle Paul himself needed their permission to speak.

What is interesting to me is that Paul did not make a power play like so many in the ministry do today. “I am the pastor/apostle, so whatever I say is God himself speaking and you MUST OBEY ME!” For example, can you imagine the pope of the Catholic Church going to a large, normal Catholic church, and having to write asking permission to come to speak? If he doesn’t get it, then he won’t come?

There are many conclusions that come forth on considering this.

Churches should not have authority structures over them

The most obvious thing is that in Paul’s relationship with the Corinthian church, he had no authority over them even though he founded the church, he started it, and many or most of their members were probably saved under his evangelistic ministry in Corinth. Moreover, Paul was an Apostle of Jesus Christ, so he also had that authority. Besides that authority, he was an author of divine Scripture. Remember not all of the twelve apostles of Jesus wrote inspired books of the Bible.

The important thing here is to understand the situation. Paul did have authority from God. He was called into the ministry and he had God’s authority. Having God’s authority and forcing it upon the people under him, that was not the way to do the work of God. Instead, Paul used God’s authority in His inspired word to convince people of what God has said.

Paul shifted the argument from Paul onto the God of heaven. Paul was called and Paul knew that, but everybody that disagreed with Paul would take Paul’s calling and authority as an issue. Paul could have defended his authority and calling and he indirectly mentions and teaches that, but the force of Paul was not from his being an Apostle, but rather what the Scripture has clearly said, and what they collectively learned from Jesus Christ’s teaching. The force of those things outweighs any argument for the authority and calling of Paul.

Pastors should not force obedience to themselves on their people. They should force their people to obey the Bible. The problem is, not everything pastors say and teach can be sustained from Scripture. Pastors need to backtrack on some issues and try to make sure that everything they teach is well-founded in scriptural exposition, and skip as unnecessary what they cannot clearly teach from Scripture.

Churches should have some kind of representative decision making

As in all the church epistles that we have, the letters were never written to a specific person (as a rule). Maybe third John or some others would be exceptions. But the general rule is that the divine authors of Scripture wrote to the church instead of a specific leader heading the church.

The issue is very simple. People in the New Testament churches were never to blindly follow their leaders, but in every case, the leadership convinced them of the biblical course or position, and everybody followed Christ, the Bible, God. Although these leaders were key in teaching and preaching the Scripture (Titus, Peter, etc), their authority was derived FROM SCRIPTURE, and their excellence came not in speaking ability (Peter was a lowly fisherman) nor in innate divine authority from being an apostle, but rather their authority came from the logic with which they argued Scripture. These writers of the Bible books knew what they understood and wrote better than others, and thus the Christians put their trust in them.

But today, many people first trust the minister, and then obey and believe everything he says trusting him that he is biblical. In Bible times, the Christians of the primitive church believed Scripture and followed Scripture. They honored and respected these divine channels of teaching not because of what they innated had (authority) but because they knew the Scriptures and convinced the churches and brethren of the biblical position.

Biblical leaders – “This is what Scriptures teach, so believe that.” (and they explain the “that” with more Scriptures, logic, and exposition).

Today’s leaders – “I am God’s mouthpiece, so obey me in everything I say.” (and they make little attempt to prove their dictates with biblical exposition).

What we can learn from this

As a minister, preacher, teacher, leader, God does not want us to force God’s people into obedience under you just because you as God’s man are demanding things. We need to learn to teach forcefully to gain consensus so that people actually believe the way we do.

We must be logical, biblical, scriptural, and expository. We must teach and preach the Bible. What it says, and not what we want people to believe and practice and we force some passage to “fit our concepts”.