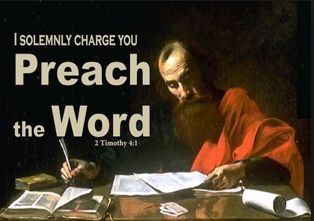 In this article on Preach the Word we give an exhortation to truly break with the poor preaching habit and change people’s lives.

The Problem with many a Church: Poor Preaching

2Tim 4:2 Preach the word; be instant in season, out of season; reprove, rebuke, exhort with all longsuffering and doctrine.

Paul’s exhortation to Timothy should be heeded. Our basic activity is the preaching of the Word of God. When men think it is cute to add jokes, and senseless illustrations that really don’t capture the point of the scriptural text, they don’t preach the Word.

In my own opinion, most pastors and preachers don’t preach well, and the problem is simply laziness, to begin with. Instead of preparing themselves for the ministry, they take a slackards attitude towards it. Anything that passes is okay. I went to Bible college and seminary. But my religious education really didn’t get “up and running” until I arrived on the mission field. I literally spent hours and hours studying things that I never actually preached or taught in the time around those studies. But those studies helped me understand things that have helped my ministry a lot over the years.

But this is the tip of the iceberg really. The real problem with most preachers is that they don’t understand the Bible very well. I am not saying this trying to sway preachers to some theological position I take. I am saying this as a person with a Masters degree in Educational Administration and Supervision. Teachers don’t teach well because they don’t understand the material well themselves, they see material instead of objectives and needed foundations, and the needs of their students. Preachers get lost in giving information “about” the Bible instead of letting the Bible talk to the people about the crises of their life. Preach the Word and change people’s lives.

A preacher friend of mine (older than me) gave me some advice that I should stop preaching topically and just preach through the Bible, verse by verse. That is good. But after praying about it and mulling it over, Jesus didn’t do that, nor do we have any preacher in Scripture take a book of the Bible written before he was around and go verse by verse through it, expositionally “teaching it.” I am not saying that is unbiblical, it is not just the evidence that we have of biblical sermons, which are all topical. Some of them take a single verse and expositions it like Paul’s explanation of “seed” instead of “seeds”, but that is not verse-by-verse expositional sermon preaching.

I see and hear people influencing our young people about respecting lesbian gays, and how it is just how God made them. So when I hear that among our young people especially, I preach a sermon against homosexuals. Even in expositional sermons, it is valid to bring in other passages that have to do with the issue. What happens so many times is that our pastors and preachers don’t want to deal with controversial issues even though they are spiritually destroying our people, and so they preach through Romans, and hot skip over the references in Romans 1 that prohibit and show God’s disdain for homosexuality. This is a cop-out.

The Church Ministers to its People.

Good preaching needs to be seen only as preaching that meets the spiritual needs of the people in front of the preacher. It is highly disgusting to me to sit in a church and hear a Sunday School lesson about the twelve tribes of Israel, and it is all information. That is what I get in personal study. It is good. But every single preaching and teaching opportunity in a church is of limited duration. In other words, the people listening to you only have x number of opportunities to be helped spiritually. I learn what I already know about the details and facts of the relationships of Israel’s kids.

But there is no call to action, and there is no application that is worthwhile. I see men listening that seems to have a feminine “bent” and probably should sit under a sermon against homosexuality and men acting like women. But the typical church gives information about the Bible, not the soul of God to make their people conform to the character of God, leave off sinning, and do righteousness. Preach the Word should be the heartbeat of the church.

Even in good pedagogy teachers are taught to make objectives and teach to the objectives. But preachers seem content to teach information and let God take the burden to the people so that they get any kind of application out of that for their own spiritual life.

When you Preach the Word, People come Back

When you press the Word of God in application to people’s lives, many get offended and some go away and don’t come back. We don’t want that, but in reality, that is what they need. They need a John the Baptist or Nathan to stand before them and challenge them on their sins. When Nathan pressed David the King, “Thou art the man!” do you think that Nathan was in a popularity contest before the King? He was probably risking being executed for challenging the king, and if David was in a particularly bad mood, that could have happened. John the Baptist was beheaded. Jesus was also killed because the people hearing his rebukes didn’t like it.

These are examples of good preachers. They are people who threw aside personal risk to fulfill the ministry and calling God has given them to do. Today’s preacher pales in comparison. Preachers should always be as nice as possible. They should greet everyone and do everything possible to cause a good impression. They do this not to get people’s money, but to keep their people when he steps on their toes in the sermon. Many people will leave because they cannot handle such strong preaching, but if they are saved and God is doing a work in their lives, God can use your good preaching to change their lives, and when they are changed and walk with God, they will not want to return to a church that just gives them information but to a church that actually helped them correct their spiritual life. Preach the Word and change people’s lives.